Protecting your engine is paramount, that's why you need mud skirt kits.

Once you've had a body lift on your vehicle, your undercarriage and engine are left more exposed to rocks, dust and water thrown up as your drive. But this threat is easily avoided after installing a body lift by fitting a decent mud skirt kit, which will fully protect your vehicle in all conditions. 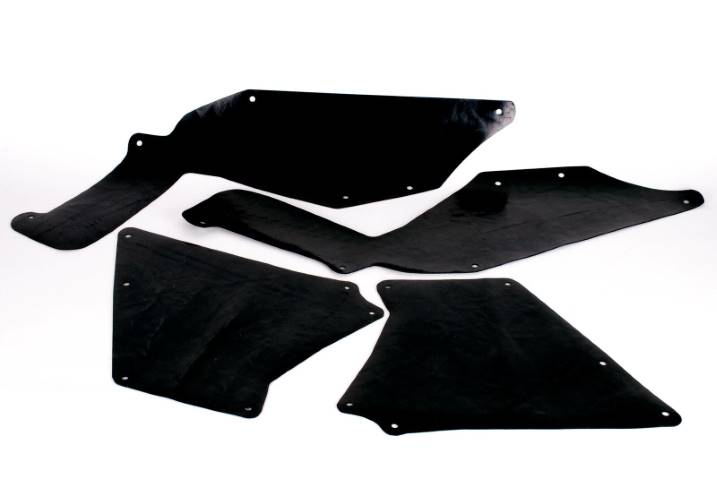 Following a body lift on your vehicle there is typically a gap between the chassis rails and the body, which means mud from the tyres will shoot out of the wheel arch and up into your engine, scattering lots of harmful mess, which could ultimately smother a petrol engine ignition system.

And while many manufacturers install a set of mudskirts which cover the the gap between the chassis rail and the body to prevent this, they are generally held in place with plastic clips... the mudskirts may stretch with a body lift initially, but sooner or later they will fail.

Extended mudskirt kits are the answer, but should you DIY it?

Of course the answer to stopping this mud getting where it shouldn't is to fit an extended set of mudskirts to cover this gap. Extended mudskirts are quite simple to make yourself, just bear in mind that the material you need is really expensive and you only need a small amount of it... plus it may be easy but it sure does take a lot of time.

A much faster and ultimately cheaper fix is purchasing a pre-made extended mudskirt kit which has already been CNC cut from insertion rubber and comes with strands of fabric which act as strength reinforcement.

The low down on cutting extended mudskirts

There are a number of methods to choose from when it comes to cutting your mudskirts, but by far the best and most accurate is CNC water jet cutting - which also eliminates the potential for damage to the rubber - is moulding the mudskirts from rubber, but it's really expensive.

By the time you weigh up all the costs of making and fitting extended mudskirts yourself, it will almost certainly be more expensive and more time consuming than simply buying a decent all inclusive mudskirt kit.